Whatever the cause, I was in a meltdown for over 3 hours last night. A 38 year old woman brought down to the level of an overwhelmed 5 year old over the subject of corn. I walked to the bed, lay down, and put my weighted blanket over myself. It calmed the anger and anxiety, so I was no longer tempted to kick, and scream, and throw things – but the depression remained, and grew. 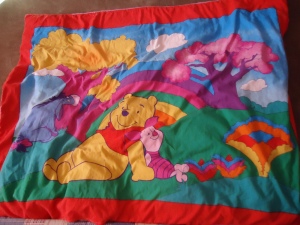 I could not move. I could not communicate – the words in my head would not come out; this has been my struggle since childhood. I could not get out of this on my own. There I was, stuck in my head, and unable to ask for the help I needed to pull me out.

As for the cause, I guess that I have had a build up of self-doubt in the past few weeks over the work/income issue. I feel like a burden to my husband, and fear that will not change. I have written so much about this in previous posts, so I will not get into it here, but it is a hard place for me to be. I know that it is best for me to be able to stay at home, but I am unable to live off of someone else’s income (including my husband’s) without questioning my purpose in this world.

Then there was the night before, when I cried myself to sleep after realizing it had already been a month since my cat died. I have a lot of trouble with death. I guess that goes with my issue with time. How can someone be gone, and why can’t I get to them, when I see them so clearly in my mind? It is especially hard with my animals. We live in a broken world, but it isn’t their fault. I hate to see the animals suffer. I hate that they have to die. The whole issue of death feels so wrong, and I cannot get past that.

At church, we had two of our campuses together for the service I attended. Some of the people who came I haven’t seen in years. Unfortunately, not all of them heard about the failed adoption, and someone asked me about my children. It has been nearly six years, and still it breaks my heart. It is hard for me to speak about. I was in shock. It has been a long time since people at church have asked about my kids, and I wasn’t ready to speak of it. I quietly answered, “fine,” like I would if they had asked how I was. It doesn’t feel honest. It doesn’t feel right to answer this way. But I have learned that when people ask these types of questions, it is just supposed to be for polite conversation. They are not seeking anything more than that. They do not want it. But innocent as it was, the question hurt me, and I wish it hadn’t been asked.

After church, I was so tired and nauseous from my medication (the dose was increased last Thursday, and I am experiencing side effects again) that I couldn’t think of lunch. I fell asleep, and slept for 3 hours. It is very rare that I nap, but this medication causes me to crash every afternoon for about two weeks after an increased dose. Having missed lunch, there was that more pressure on me to have a decent supper. I was so nauseous, however, that I couldn’t think of something to eat with the corn my husband brought home, and was therefore dependent on him to come up with something.

Because of how sick I was feeling, cheese, lentils, and wheat were all out. I can handle them when I am well, but not when I am feeling so sick. Those were the suggestions my husband had for me, and I couldn’t bring out the words to express why they weren’t acceptable options. I would have liked to ask for BBQ chicken, like we had at the lake, but I don’t use the BBQ, and the words wouldn’t come to ask him to make it for me.

I prayed that God would send him to me, and tell him what he needed. I prayed this so many times through the night, but he didn’t come. My conclusion in this state was that God doesn’t want me; I don’t belong to Him; when I die I will spend eternity in Hell separated from Him. It is easy for me to be attacked when I am in this state, and as you can imagine, it does nothing to help lift my depression.

I was sure in that moment that the reason my son turned away from faith was because I don’t even belong to God, and He doesn’t hear my prayers. The thought that it was my fault that my son would spend eternity in Hell, because I was selfish and kept him, when others could have raised him so much better, hurt more than anything else. I love my Lord, and believe in Him, but it is hard for me to accept that He would want me.

For 3 hours I thought like this, crying under my weighted blanket, and wanting so much to die it hurt. For 3 hours in my head I hoped my husband would think to go out and buy me a McChicken sandwich (though I almost never eat at McDonald’s, and there was no reason for him to think of that.) For a while, only a while, I wished he was able to read my mind. The words were there. The suggestions were there. But I could not get them out.

Later in the evening he came to me, and I cried and cried, and he held me. I liked him being there, but I needed a tissue, and couldn’t ask for it. I wanted him to suggest cereal, but the words wouldn’t come. And when I was finally ready to get up, and get something to eat, my blanket that calmed me also held me down. I couldn’t get up, and I couldn’t ask him to take it off of me. I know it wasn’t fair, but I wanted him to know those things. To see that I needed this, and for him to just offer. I couldn’t speak, but I needed the help, and there I was – trapped.

He went and let our dog and cat in for the night (we still have three other cats, though we lost one.) Gryffindor, my dog, came and started licking me. I turned towards him, and the blanket slipped off. I rested, curled against him for a while. Then I got up, made some cereal, and ate.

Three hours. Three hours of pain, suicidal thoughts, and hopelessness – all for a piece of corn. And people didn’t know I was Autistic.

Posted by Walkinfaith925 on August 3, 2015 in Autism: Reality, Sensory Issues, and Other Abstract Concepts

← Autism: Repetitive Behaviour
Autism: Why I Share My Weakest Moments →