If we can do things to better the world, shouldn’t we?

And if we are convicted against participating in things that others consider ‘normal’, shouldn’t we?

However, decisions on which way to turn are rarely so easy to make, and what we choose for ourselves, also has an effect on other people. So how do people decide what is right or wrong, and follow through all of the time?

I thrive on absolutes, and rules that leave no room for interpretation – that is, I think I do… only living that way only increases my anxiety, and causes large amounts of stress to those around me. So I am trying… trying so hard not to see everything so black and white.

Rigid and controlling. Those are the words repeating through my mind. Labels. Attacks. Accusations made against me as the social workers explained why they were taking my children away.

I am trying not to be.

But I feel like a hypocrite in this. I could not hunt for my food. Could not murder my animals. Could not raise animals for meat. Could not butcher them, clean them, do anything required other than cooking the final product to get meat onto my plate – and even then I have to block out thoughts of where it came from.

And then there is the cruelty factor. I have seen the videos, and had nightmares. I turn away from the articles and posts – the pain is too much for me. I stopped eating veal after seeing one commercial when I was about thirteen. I stopped eating meat for two years after watching one video – that wasn’t even on that subject.

So why did I start again? It is a question that I ask myself most days. If I feel so strongly about this, why don’t I just go through with it?

It isn’t like I couldn’t find enough foods. I crave most vegetables. I like eating fruit. I am addicted to nuts and seeds. I prefer black beans and lentils to beef. I even really like meatballs made with chickpeas better than the real thing. 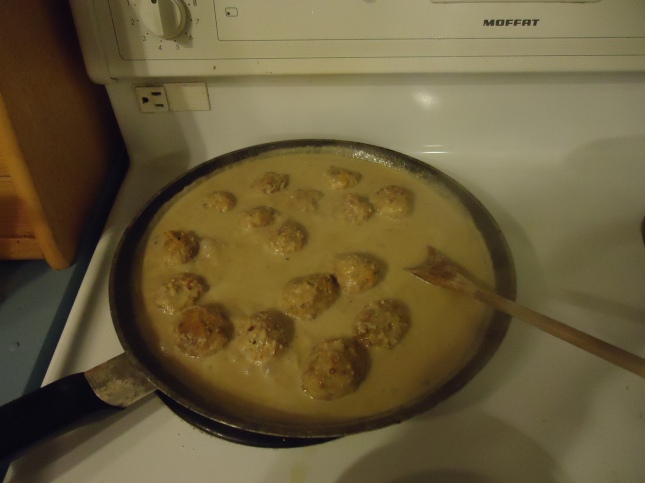 I am allergic to eggs, and intolerant to dairy – so even becoming a full vegan wouldn’t be that much of a stretch for me – and the cruelty involved in the egg and dairy trade isn’t any better than for meat.

Many days I have spent fixated and perseverating on Pinterest getting inspiration for vegan foods. I have tried many, and like a lot of them.

What is more, I feel a lot better after eating vegan meals. Meat has been leaving me feeling nauseous and uncomfortable much of the time since I started eating it again.

It is cheaper, healthier, and often tastes better in my opinion. So why did I start eating it again?

Because I was trying to not be so difficult. I have so much trouble, and so many meltdowns over food – and if I can’t eat with others, especially when I am away from home, it will almost always end in a full three hour long meltdown.

And when I want to create meals for my family? There is no way my husband and son would choose to eat as I do. They like their meat. Their vegetables, not so much… but I am the picky one. So I make the foods they like, and sometimes I eat them, too.

And when other people think of vegan, or even vegetarian food, their first solutions seem to go to pasta and mushrooms... and I can’t. I can’t eat pasta and mushrooms. Even the very thought leaves me nauseous. I even have to cover my nose (and still end up crying under my weighted blanket) when others are cooking those foods for themselves. The very smell causes me pain.

But what is the cost of trying to live a more moderate lifestyle for the sake of others? I choose to eat vegan whenever I can, but is it enough? Is it really enough? I may need to consider this subject again.

Rigid and controlling. I am trying not to be. But sometimes I have to live as I believe.

Posted by Walkinfaith925 on December 22, 2015 in Autism: Out in Public, Experiences of an Autistic