I know that we weren’t supposed to go in. But we were kids, and it was exciting, and there was a group of us – all encouraging each other.

The house was an old, abandoned Victorian. It had bay windows in the front, and what seemed to be an addition in the back. That was where the fire happened. A lot of it was boarded up, but we weren’t the first ones to explore it, and there were ways to go in.

It was in a small town by the lake, down the hill from the campground where we were staying. It was a way to pass the afternoon. I guess I might have been about 12 years old, and most of the kids I was with were older. I was following along – but then, I have always been interested in houses, and I love(d) old, abandoned Victorians.

So I stepped through what was left of the door, and into a charred, messy kitchen. The cupboards and walls were black. The floor was peeling up, and crumbling. The windows were boarded. Through the kitchen, their was a hallway that led to the stairs. I don’t remember much of the main level as we passed through – only much of the same – dark, burnt, peeling, crumbling. 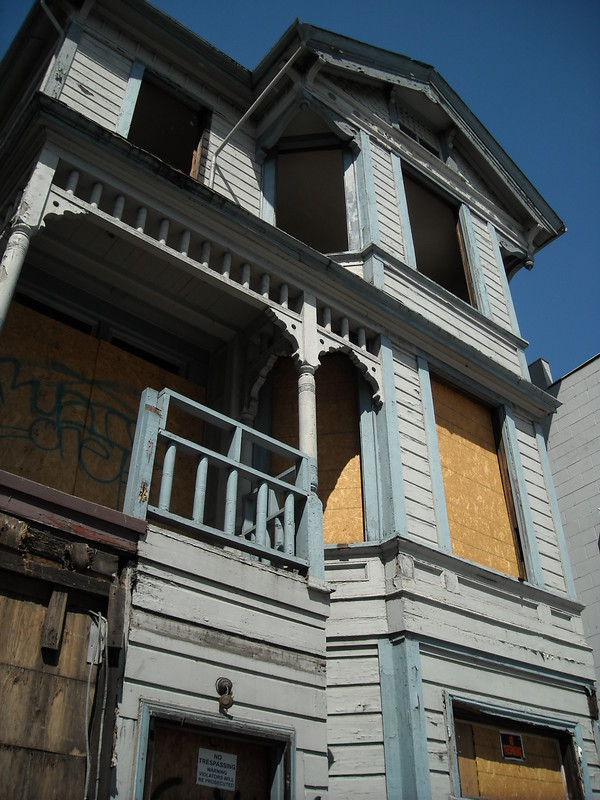 I followed a couple of kids up the stairs, with others coming behind me. There was a worry of falling through, but we got up okay. Two of us walked into the front room, which had a bay window, with all of its glass still remaining. The room was old, but the fire hadn’t reached that far. What I remember most were the cards. Hundreds and hundred of greeting cards scattered all over the floor, and I asked myself, “why?”

There were birthday cards, and Christmas cards, Easter cards… hundreds and hundreds. What were they doing there? I can understand that the house was abandoned in a hurry, but this never made sense to me – and perhaps that constant question, that has been in the back of my mind since that day, is the reason that I never throw out any of my cards.

I guess as a result of my traumatic childhood, and overactive imagination, I was hyper aware of my environment. I could walk into any space, and have an accurate picture in my mind of the floor plan, all methods of escape, and where I would hide if something went wrong. From very early in my childhood, I had this ability, and it lasted as strong into my late twenties. (I can still do it, just not to the same degree.)

Perhaps that is the reason that this section of the house stood out so much to me. We left the “card room” and walked down the hallway until we came to another set of stairs. What really stood out about these stairs was how the carpet looked fresh, clean and new. Going down the stairs, there was a room, furnished with all new furniture, clean walls… a place that not only looked untouched by the fire, but looked “lived in” and stood in stark contrast to the rest of the house.

In worry that someone did live there, and would be coming home, we then got out of the house quite fast. The thing was that I could have sworn (okay, not actually sworn – but…) that the new section of the house, by the plans I had in my head, didn’t exist when we were on the outside. I mean the space that that section should have occupied, in my mind, was where the well and fields were beside the house. I know that I could have been wrong about this – but as floor plans were a kind of gift of mine, I am still not convinced.

And maybe it was that experience in my early years – which left so many questions, that I continue to ask myself to this day – that leaves me not fully convinced that all of reality is what it seems to be.

Posted by Walkinfaith925 on March 1, 2016 in Autism: Reality, Sensory Issues, and Other Abstract Concepts, Experiences of an Autistic