It used to be that I had trouble getting to sleep, but once I was asleep, I was good until morning. It isn’t that I slept right through, but would fall asleep in seconds for any time I did wake up. For that reason, I had a real hard time with getting up at 5:30am for my morning shifts, or being woken up in the mornings by my husband (or children.)

If I don’t get 8-9 hours of sleep every night, I suffer for it. I was never the type who could stay up to all hours, and then function well during the next day. Even one night with less than perfect sleep causes me a lot of trouble, and that builds each night. 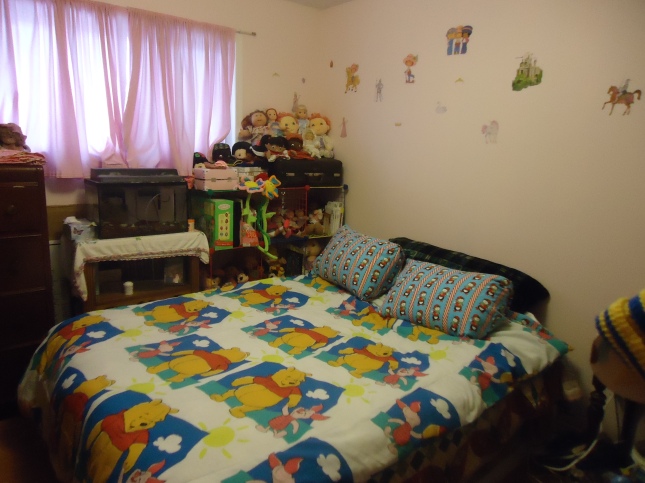 My son says, “that isn’t how things work,” when I tell him I am behind so many hours of sleep. Like the one week I spent in Vancouver for assessments with my youngest ‘daughter.’ She had been sick that year, and I was traveling to Vancouver a lot. I felt bad for them, especially the middle two with their severe attachment issues, and so I brought them all along.

However, staying in one room at the Easter Seal House was probably not the best thought out plan. I am a light sleeper, and two of my kids didn’t sleep. For the entire week. I could hardly function, and by the end of the week was about 20 hours behind on sleep.

My son would say just one good sleep would make up for that – but not for me! No, I needed the full 20 hours, on top of my regular sleep, which was very hard to do. I think I ended up napping with the children, and going to bed at the same time as them. Thankfully, the three youngest still napped, and had early bedtimes. Still I ended up missing a scheduled appointment the week we came back, and I never miss appointments. I was just too tired.

Even now, when I haven’t children to wake me up, and my husband has learned not to, I still struggle with insomnia that causes me a lot of issues with my functioning ability. I do not do well tired. I never have.

Although medications do cause me side effects, I got about as sick from not sleeping as I did from the medications, and would rather be able to think. So I took the pills. Because I struggle with headaches, stomach issues, and allergies, my go to pills for self-medicating were ibuprofen, Gravol, and Benedryl. Most of the time they helped with both issues (I wouldn’t take them all at once, or combine more than two, but would take whatever I felt I needed most.) Sometimes they backfired.

Then, when I mentioned my insomnia issues to my Psychiatrist, she put me on sedatives in combination with the anti-depressants. She absolutely did not want me on the Gravol (for whatever reason, and discouraged the others as well.) For the first time in my life I think, I fell asleep most nights within 5 minutes, and almost nothing could wake me up. It was great! Until they stopped working that is. When the medication was increased, the side effects became too bad, and still they didn’t work.

Now, as I have just about weaned myself off of my medications, I am once more having a lot of trouble sleeping. Only now, instead of just having trouble getting to sleep, I also frequently have trouble not being able to get back to sleep, which was never an issue before. Most nights I am getting 5-7 hours of broken sleep, and there are far too many nights like last in which I am lucky if I managed 3 hours all together.

I am tired. So tired. And the ibuprofen, Gravol, and Benedryl? Hardly work anymore. I suppose insomnia is a common problem for those of us with Autism, but I also happen to be one of the unfortunate ones who really needs that sleep. I hope a solution can be found soon.

Posted by Walkinfaith925 on May 9, 2016 in Autism: Mental Health and Healing, Experiences of an Autistic

← Autism: Maybe Tomorrow I Will Do Better
Autism: Necessary Dogs →