The thing was, I was starting to feel good. It might not have seemed like much to other people, but had anyone been familiar with how my thoughts have been fixated for the past… thirty years, really, they would know that this has probably been the biggest breakthrough of my life.

Sure people respond as if to say that when a dream doesn’t work out, accept it and move on – and I admit that might be good advice; but it is not me. Believe me, I have tried to let this one go. Especially since the loss of my children, I have tried to let it go. What good has it done me anyway? It has only led me on a path of failure and pain.

Yet for all the reality of it, I still wanted to be able to have children. I still ached for this. I still wanted it bad enough to dream of horrible circumstances I could find myself in that would allow this… fixation to become a reality. I knew this was bad for me, bad for my marriage, bad for my relationship with my son – but I letting go of this demand in my heart and mind for children,which drowned out anything that might have been a blessing to replace it, was impossible.

I had my son, and I ran my daycare, and I had children in my life for a time – and then it was over; and I still wanted them. The adoption fell through, and it more than broke my heart; it traumatized me. I am still living with the trauma of that. I was left broken, and I was given my Pomeranian, and I loved him. So I got up, and I tried to live again in the world where I not only didn’t belong, but where others – by look, action, or word – told me over and over I didn’t belong (and it was my fault.)

I still had my dog, and I loved him. I enjoyed my time with him – yet still felt that something, in the form of children, was missing from my life. Then he died, and my heart broke again, and the trauma and fear grew.

So I was given another dog. The pain was still overwhelming, yet she brought me joy. I love that she is tiny (6.5lbs) and follows me everywhere, and wants near constant attention. She filled a place in my heart that has been aching to be filled for decades, and I found contentment with her. I was happy enough that when her previous owners asked me if I would take her mother, too, my initial answer leaned towards ‘no.’ (So very unlike me for this type of thing.)

Yet happily, after months of consideration, I decided to take her. Now I have ‘my girls,’ and I have felt so content with them that it… doesn’t replace, but instead answers my desire for children. A better blessing for a person like me. 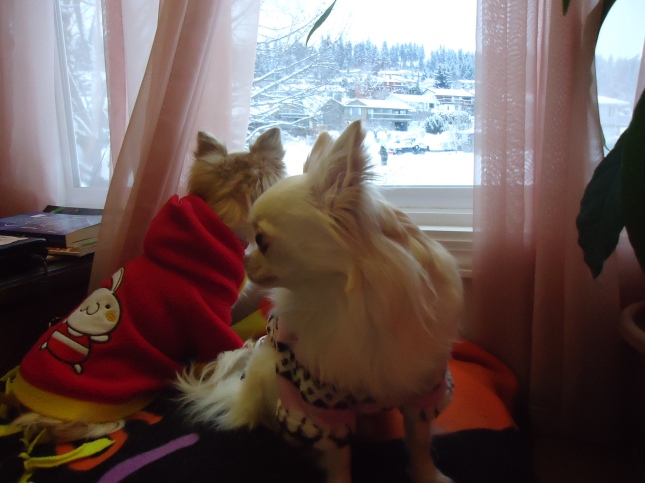 So I went into the doctor’s office feeling thankful for this contentment that was the end of a 30 year battle that others rarely understood the depth of – and she was disappointed in me, and wanting to give up on me, because I wasn’t visiting people more, and I was still so anxious over work.

She wanted me to contact a couple of places about work and behaviour therapy for people with Autism – and I did… yet what I got from them was more of the same: judgment and disappointment that I wasn’t healed enough to allow them to help me work (after all, that should be the goal of every adult, yes?)

Okay, so I am not ready to go back into their world. I wonder if they had experienced what I have lived through if they would be able… but then the success stories they keep talking to me about (as if that should be my goal) is for people who hadn’t been able to go to college – then did, or hadn’t been able to find work – then did… they forget that when it comes to me, I am on the other side of this: I have been to college, I have worked, I have gone out there and tried – and I failed so bad that over and over the trauma grew.

I don’t need to “go out there” to find that I can do it – I need to be healed from my time “out there” because I couldn’t do it.

Besides that, they miss the point. They are looking for some huge goal that looks normal to them, and missing the huge battle that has just been won: I can’t have children, and I am finally okay with that. I was feeling good about that, and was met with judgment and disappointment…

Another small moment in their world… just a short time… and by their look, words, and actions I hear that I don’t belong – and I never will. Another failure. Another failure that says I can’t, and they get frustrated with me when they tell me I can, and I don’t believe them.

Posted by Walkinfaith925 on January 6, 2017 in Autism: Jobs and Careers, Autism: Mental Health and Healing

One response to “Autism: Judged and Frustrated”