RSS
← Autism: Value In What I Can Do
Autism: Extended Support →

On Christmas day my son and I opened our presents from my husband, and were pleased with the chocolates and Thomas Kinkade puzzles he had got us. There is very little that we all have in common other than being introverts who enjoy spending time on our own things. Puzzles are something that we all love to do, and can do together. It was a good gift.

My puzzle was a ten-in-one, with the largest puzzles containing 500 pieces. My son’s was a 1000 piece puzzle of a cottage, lighthouse, and water. We started on that one, for the only way we would get it done was to work on it over the Christmas holidays.

We started it Christmas day, and worked on it at times throughout the next five days. We were doing pretty good – it was a hard puzzle after all. My son was getting the sky done (he often chooses the harder parts, for he is amazingly good at puzzles; always has been.) My husband and I were working on the house and trees, for it was easier for us to find the pieces.

As I said, things were going well.

For a bit of background information, a little while before Christmas we had bought cat grass to stop my cats from eating my avocado trees. When it sprouted, we put it on the table by the dining room window, since the one cat especially had been spending a lot of time there. They liked the cat grass, although the tiny plastic container that was provided, along with the peat moss, did not actually make a good place for the grass to grow – the cats would chew the grass, the peat moss would lift up, and the container would fall over.

I put it in a ceramic container, and it was better, but then I went over to the table to find Finn, our Siamese, had peed on the table. She had never done that before (she did have a preference for rugs as a protest whenever the weather got to bad to go outside, but the rugs had been removed.) My guess was that the grass on the table confused her to thinking it was ‘just like’ being outside (despite the fact that the container of grass was smaller than a tub of margarine.) 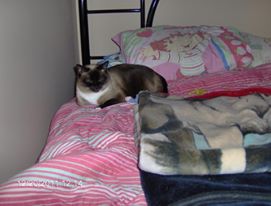 I cleaned it up, and moved the grass to another spot off the table, and the problem didn’t repeat itself.

Enter in day five of puzzle making. My son had been working on it in the morning, and things were dry then. I went over closer to lunch time, and the box with the sky pieces in it were all wet. Finn! Sure enough, the cat grass was right next to the box of sky pieces (my husband having placed it there to get into the freezer on top of which the grass had been moved, and he forgot to put it back after.)

My son’s Christmas present. Five days of work. Time with my family. All destroyed in one mistake.

Logically, I know this wasn’t my fault. Logically, I can see that in most things it is not my fault; not fully my fault, or at least not only my fault. The thing is, though, I do not often function from a logical standpoint. All things stem from my heart, and my heart condemns me for everything that goes wrong in everyone’s life – even if I had nothing at all to do with it, or wasn’t even around when it happened.

Mea Culpa: I am at fault. Always. In everything. As if my very existence means ruin for the rest of the world. Such shame… such a heavy weight of shame I have carried since early childhood.

And people respond to this look of guilt in me as if I must be truly guilty. I understand that. I do. But I wish they would understand that just because I look guilty, feel guilty, seem guilty… doesn’t mean I actually am. It is hard to defend myself when my heart condemns me for everything.

Posted by Walkinfaith925 on January 20, 2017 in Autism: Mental Health and Healing, Experiences of an Autistic

← Autism: Value In What I Can Do
Autism: Extended Support →